Conrad Hicks was born in Cape Town in 1966. He studied Art and Design at The Cape Technikon and graduated with a distinction in 1986.

Conrad specializes in hand-forged metal work and uses this technique in his sculptures as well as in his architectural and interior design projects. His forge is housed in The Bijou, an old Art Deco cinema in Observatory, which he bought and began restoring in 1998.

Conrad’s designs are influenced by the time he spends at the forge developing his own methods,” My best products come directly from a personal exploration of the materials and process”. He remains true to the craft, avoiding welding as valueless with no symbolic meaning. Conrad asserts that all traditional blacksmithing jointing methods have innate metaphorical meaning adding to the final symbolic meaning of the finished form.

“I see the importance of the expression of the individual through the craft and I enjoy the continuous discovery of myself in my tool marks. “

“Recently I have realized that my pieces are all tools, a blacksmith is a tool- maker, whether the tool is used to cut or to communicate, they all hold the values of our society and represent our cultural achievement and become sacred objects.”

Conrad works on a broad variety of commissions which range from architectural projects to sculptures for private collections. He was the commission to design the prestigious Kirstenbosch Gates in Kirstenbosch Botanical Gardens. He designed the metal gates, screens, doors, and spiral staircase for Tokara Winery and also created the gates at The Cape Quarter. Conrad completed six sculptures for the 2010 World Cup Hero Walk in Cape Town. Since 2009 he has been working mostly on sculptural pieces. 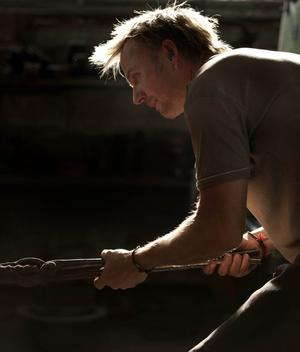